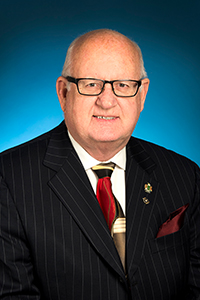 Councillor Wayne F. Fertich is serving his first term on regional council. He previously served as town council alderman for the Town of Grimsby from January 1998 to December 2010 and on Niagara Region's Transportation Strategy Steering Committee, and Governance Committee for the Berkley Report.

He joined the Royal Canadian Air Force in 1967 as a finance clerk and in 1978 was the comptroller of the law firm Jones, Emery and Carfro in Victoria, British Columbia. After moving back to Ontario in 1985, he spent the next five years as the personal accountant to Michael G. DeGroote. He purchased the Gable Restaurant in 1992 and retired in 2008.

Councillor Fertich has been a member of the Royal Canadian Legion for 43 years, and the Lions Club for 34 years. He is presently a member of the Grimsby Rotary Club since 2012 and has received a certificate for Passion to Excel from the international president. He also received the Paul Harris Fellow Award in September 2011.