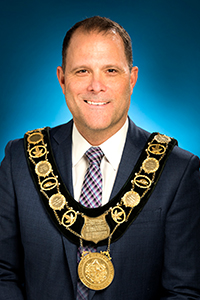 Councillor Walter Sendzik is serving his second term on regional council in his capacity as mayor of the City of St. Catharines.

Councillor Sendzik was born and raised in St. Catharines. In 2014, as a first time candidate for political office he was elected as mayor of St. Catharines and re-elected in 2018. As mayor, Walter brings a strategic focus and business-like approach to city hall where he has focused on streamlining processes and building a culture of excellent customer service. Since becoming mayor, the City of St. Catharines has approved a new strategic plan and economic development strategy, stabilized tax rate increases and implemented long-term budgeting.

With a background in business, Councillor Sendzik has been a strong advocate for local business and regularly meets with local businesses, employers and investors. Understanding transportation as key for business success and getting people to work, school and services, Councillor Sendzik has led in the transformation of inter-municipal transit from pilot project to a permanent service that will connect all of Niagara's communities. He has helped bring private sector partners to community events and worked with the development community on a new Housing Action Plan.

In 2015 Councillor Sendzik launched the Compassionate City initiative which has helped inspire St. Catharines' residents to take action to build a city where everyone belongs. With his open door policy, Councillor Sendzik is accessible to residents, charities and community groups and regularly participates in fundraisers, 5 k’s and cultural experiences. He's focused on building on the progress and momentum of the city and the greater Niagara region as an attractive place to live, work and invest.

Prior to becoming mayor, Councillor Sendzik was the chief executive officer of the Greater Niagara Chamber of Commerce. During his seven years at the chamber, he led the evolution of the local chamber into a truly Niagara chamber with more than 1,400 members. Under his leadership, the Greater Niagara Chamber of Commerce established itself as the largest business organization in Niagara and the third largest in Ontario. It is also the only chamber in Niagara to receive accreditation with distinction for operational excellence by the Canadian Chamber of Commerce. Prior to the chamber, Councillor Sendzik founded Vines Publishing, a company specializing in wine and travel magazines and wine books. He sold the company in 2005 and has co-authored five books including Vines: The Buyer’s Guide to Canadian Wine and The Insider’s Guide to Niagara Wine Country.

Councillor Sendzik has served on local and provincial boards, including Niagara College, Hotel Dieu Shaver, Pathstone Mental Health, and LCBO, and currently serves on the boards of:

In 2008 he was awarded the Bernie Gillespie Award by the Ontario Chamber of Commerce as top executive of the year. He is also a recipient of a Niagara Top 40 Under 40 Award, an active Rotarian, and an honorary member of the Royal Canadian Legion Branch 24 and the Canadian Polish Society.