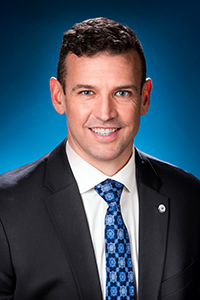 He is a high school physics teacher at Saint Paul Catholic High School in Niagara Falls and a member of the Ontario English Catholic Teachers' Association and the Ontario College of Teachers.

His community involvement includes being a Niagara Children's Centre board chair, as well as a coach for Niagara Youth Flag Football and CYO St. Catharines Hockey.

Councillor Siscoe is the husband of Chrissy Sadowski since 2007, and father to four amazing children: Xavier, Canaan, Darius and Sophia, as well as two dogs: Apollo and Andy, and five cats. His hobbies include reading, running and learning.