COVID-19 - As Ontario reopens, learn about public health and workplace safety measures. Learn about the COVID-19 vaccination and service disruptions. 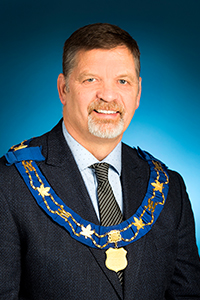 As an RCMP officer Councillor Gibson has various levels of experience working with different levels of government, including working with foreign governments to develop and implement protocols to assist Canadian investigations.

He is currently the sole owner and employee of Gibson Auction Service. Being a formally trained auctioneer that mostly specializes in charity auctions, he has raised hundreds of thousands of dollars for charity over the past five years.

Councillor Gibson is active in the community having volunteered for much of his life. He has coached soccer for years, helped build a habitat for humanity house, rode a bicycle from Vancouver to Toronto and raised $28,000 for CNIB. He volunteers with the Marshville Heritage Festival, has been on church boards and helped raise funds for the Canadian Cancer Society.

He is happily married to Lynn and has two daughters.